Time Flies, or Does it Tick and Tock?

What up, what up, WHAAAZZZUUUUUPPP!

Time has gone by so fast this last month. I'm all done with school here in Japan and I think I finished fairly strong. I'm know that I at least graduated from the intensive Japanese program that I was in anyway. I've got one week of work left and a whole lot of stuff to pack. We're working on it slowly but surely.

I'm sure everyone has already heard, but thanks to Mom and Dad, we already have ourselves an apartment waiting for us when we get back. That is at least one big thing that we won't have to worry about. There is still that little thing about me not having a job and everything, but…yeah. Hopefully I can find something good.

We are excited to see everyone again and especially to got to Greer. Let's all have a good time.

Can you tell that I don't really have anything important to say and that I'm just talking away?

Later! Here is a picture of Sara. 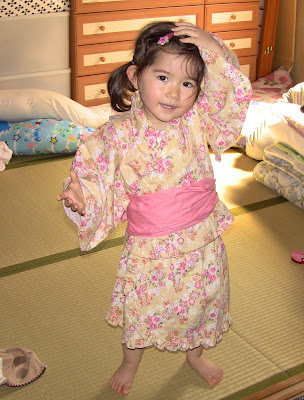 It is now the middle of June and our one year Japan ordeal is drawing to a close.


We have bought our tickets for our flight home, so our arrival date is now official. We will be departing from Japan on the 20th at about 17:00 and arriving in the U.S. at 11:00 of the same day (pretty neat trick, huh).
As everyone knows, I'm sure, our original plan was to return at the beginning of October after I went to the graduation ceremony for the program I am attending. We had problems with the visa that we had got for Rie, and since we weren't able to get another one, the embassy in Tokyo told us to go back before September 1st and we would be okay. So that is what we are doing.
It was pretty frustrating for me, after having spent many hours collecting papers and filling out forms, to have everything sent back to me and be told that all my efforts were in vain--but what can you do? There is at least one good thing that comes from us having to return to the U.S earlier, I will be able to attend fall semester classes at ASU.
Anyway, that's it for now. I don't have any pictures to show at the moment, unfortunately, but hopefully I will soon. Though, many of you will be seeing us live and in person soon enough. Aren't you SO excited? I bet you are!
Posted by Ed at 8:03 PM 1 comment:

I Have a Blog?

Yeah, so it's been quit a while since I last wrote anything here. I've been pretty darn busy, so I don't feel too bad...I guess.

Anyway, things are cool. We haven't really had any troubles or misfortunes thankfully. I'm working on getting a scholarship that will pay for my tuition this semester. I spent hours filling in forms for Rie's return visa that she is required to apply for to be able to enter the United States. That became necessary because of a series of unfortunate circumstances which were kind of out of our control, because we were ignorant of them. But, I got everything filled out and all the required "evidence" organized and copied and sent everything of too the embassy yesterday. With any luck all will go smoothly.
Sara just keeps getting bigger and bigger…which I guess is what babies usually do considering they are small and growing. I don't really have any fantastic news or anything like that. She just keeps learning new things all the time and loves to drive her mom crazy. I've got some pictures of her in her class she goes to once a week, and doing some other stuff. There is also a picture of her eating strawberries, which she loves.


One thing that I got to do that was out of the old ordinary humdrum, was go to the temple (the LDS temple, not a Buddhist one) in Tokyo. It was my first time in Tokyo and my first time in a temple outside of the U.S. Interesting and enlightening experience, more so than usual. Yes I know that is not a complete sentence, sorry. Members of the ward and I drove there in a rented van starting at about 21:00 on Friday and got there at 5:00ish Saturday. They have places to take showers, change, clean up and things in a building next to the temple, so we all freshened up a bit before we went inside. We finished at about 14:00 and headed home right away. We got back to Kyoto at about 21:00. So it was a weird but fulfilling 24 hours.
Anyway, peace to y'all and check out my new blog that I'm starting up again and hopefully can carry through this time. A link is in the sidebar on the right. Some people may like it, some people may not. Tell me what you think.
See ya!
Posted by Ed at 1:59 AM No comments:


Wow, once again it has been a real long time since I last posted anything on my weblog.
I've been pretty busy, what with the end of the semester and all that came along with that. I had of course some final exams, but I also had several reports to write in Japanese. In my classes that are Japanese language classes, I had finals in all except for one, my written expression class in which I had to write a report. I had five reports all together. One I wrote about cultural misunderstand, one about the significance of Noh Theater in modern Japan, one about the Shinto concept of kachofugetsu and satoyama and how they relate to certain Christian beliefs, another about metal casting of Buddhist images, and another about why people read books. This was all in Japanese, so you can imagine I had a busy January. But it was kind of fun too.
On the family front, everything is going well at the moment. We had a more than a few rough times over the past few months with different things, but I think we got it figured out now and are going along comparatively smoothly. Sara is getting bigger and bigger all the time it seems. She's become very good at copying things that other people do. She sees her mom and grandma always telling the dog to be quiet, so every time she sees the dog, she puts her finger to her lips and says "sssshhhh." You can tell she is getting older in the way that she thinks about things and handles certain situations. It's funny, because she loves Japanese food, like rice, fish, nori, and stuff like that. Apparently Rie was the same way when she was little. She also loves French fries from McDonalds as most kids do, though we try not to give that kind of stuff to her too much.
I wish I had something cool to write about, but we don't really do that interesting of stuff. Here are some pictures and a couple of videos of Sara doing cute things, maybe those will be interesting.

Wow, it has been forever since I last posted anything here, anything about the family anyway. I’ve been so busy with school and things I just haven’t had a chance, but here I am now. The two weeks before Thanksgiving I had a test pretty much every day in my Japanese classes. I also had to prepare a presentation for one of my “Oral Expressions” (can’t think of what to call it, that is a pretty direct translation) classes. Plus I am preparing for a debate in the other one. I also was studying furiously for the Japanese Language Proficiency Test. Like crazy man I went right for the highest ranking. Anyway after Thanksgiving I gave my presentation and took the JLPT. The presentation went well. Not so sure about the JLPT. I can’t say I did poorly, but I can’t say that I passed either. I have to wait until February for the results. But still, I feel a little better now that I don’t have that test looming over me anymore. It’s over and done with whatever the result.


Rie and Sara are both doing well. Sara is still a stinker. She understands extremely well when you talk to her, and she garbles unintelligible answers and stuff back to you, especially when you tell her not to do something. She already knows how talk back. She loves to walk and play hide and seek (even though there aren’t that many places to hide in a Japanese house). We’ve been putting things we don’t want her to touch on the table or somewhere she can’t reach, but the other day she discovered that she can use this little chair that Rie’s mom has a decoration (but Sara likes to sit on it) as a stepping stool to reach higher. She dragged it over to a table and was trying to get the stuff on top of it. I took her down and put the chair on the other side of the room in a corner, but a few minutes later she comes back over carrying the chair, puts it down, and climbs up on it again. I was watching her do the whole thing, but she didn’t care. She just smiled at me and did it anyway. We love her.

I finally signed up for Flickr. So I'll be putting slideshows on here now if all goes well. The first is of pictures of Sara I uploaded. The second is of the evening light up that they have at many of the temples and shrines here in Kyoto. They have it during the momiji season, or when the leaves change color for fall. Enjoy!

This doesn't really have anything to do with anything at all, but I was doing research for a debate in one of my classes and found this site. The debate is about whether or not they should make English education compulsory in elementary schools in Japan. I'm on the supporting side and thought I could use American schools' teaching of Spanish as an example of the affectiveness of teaching elementary students foreign languages. Anyway, this site is from The American Council on the Teaching of Foreign Languages and has tons of research that suppports the teaching of languages to children.

http://www.actfl.org/i4a/pages/index.cfm?pageid=4524#academic_achievement
Posted by Ed at 6:28 AM No comments:

Well, the time has come.

Yes, Sara is all about walking these days. She's spent the last couple of weeks really going at it. She finally decided to let go of things and walk around all on her own. It's funny, because she is so careful about it. She takes one step at a time and if she loses her balance a little it she'll stop until she get it back. It's like if she falls it would be the end of the world. When she walks of her own choice, she never falls, but if we try and make her walk she get upset and sometimes falls on her behind. There's been a few face plants and other incedents that come along with active babies, but everything is going well.

We got some pictures: 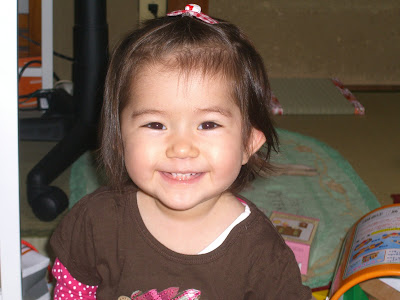 I think she looks older than one year in this picture 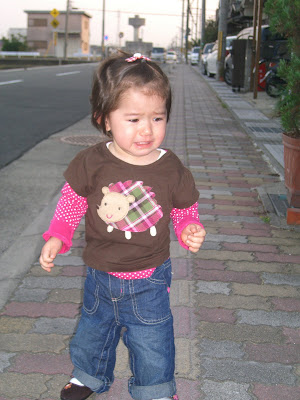 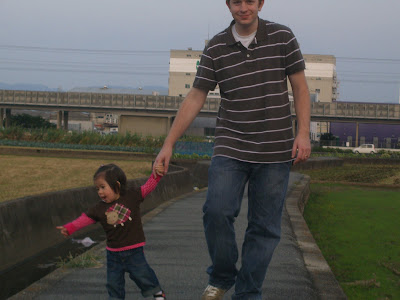 Here's Sara and I going for a walk.

The next pictures from when we went to play in the park. 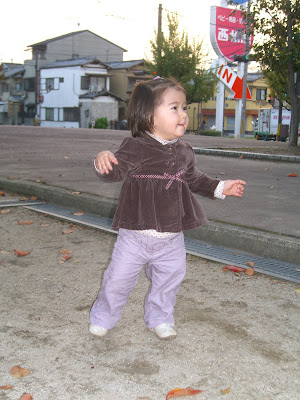 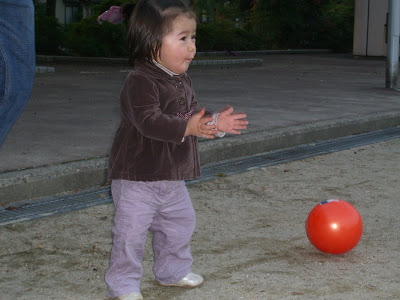 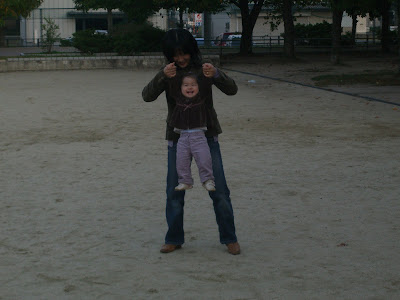 Blog? Let's Call It a Newsreel

This is my effort to keep everyone informed about mi familia. Hopefully it works. After all, I suck at this kinda stuff....
Anyway, bon appetito!